This Financial Informer we discuss the Bad Habits that result in poor wealth. As well as look at some ways at working towards early retirement! 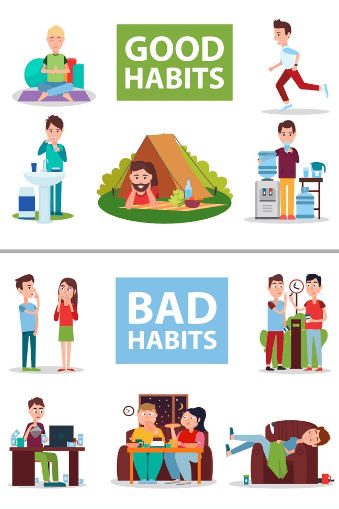 The path to financial independence is fairly straight forward for some but terribly difficult for others. However, on closer inspection, those who find it difficult are often nothing but the product of bad financial habits. Thomas C. Corley, a certified public accountant and certified financial planner, spent five years studying millionaires and gathered his insights in multiple books, including “Change Your Habits, Change Your Life.” According to Corley, there are seven bad habits that won’t lead to wealth.

1. Overspending: You simply can’t get rich spending more money than you make, whether it’s buying a car or house you can barely afford or racking up a credit card bill.”Ninety-five percent of the poor in my study did not save and most accumulated debt to subsidize their standard of living,” Corley wrote. True wealth comes from saving and investing a portion of what you earn, no matter the size of your salary.

2. Reading only for entertainment: or not at all Reading with intention is a top habit of millionaires.In Corley’s study, 92% of people with minimal assets did not read to learn.”Success requires growth. That growth comes from reading and educating yourself on a daily basis,” he writes.

3. Toxic relationships: It’s hard to sever ties with people who may be holding you back. But if you’re serious about setting yourself up for a rich future, it has to be done, Corley says.He found that only 4% of the low-income people he studied associated with “success-minded” people.”You are only going to succeed in life if you surround yourself with the right type of people,” he writes. That is to say, people who are encouraging, positive, curious, and helpful.

4. A single stream of income: Many of us rely on one job to make money, but that’s not how future millionaires operate.Sixty-five percent of the rich people in Corley’s study had at least three different streams of income set up prior to making their first $1 million. This not only supercharges earning potential, it acts as a safety net against job loss.”Poor people have one income stream. Their eggs are all in one basket,” Corley writes.